The Other Stars And Bars! (A Gallery Of Why The American Flag Must Go)

My friend and colleague, the redoubtable and indefatigable Mick “Spin” Dumdell, beat me to the punch with his article on why the American Flag needs to go in the trashcan right along beside the Confederate Flag. In my defense, I was busy trying to help two gay friends of mine find an industrial strength mattress cover. Most of the ones that you get at regular retail stores just don’t seem to hold up well for them.  I don’t know why.

We finally went straight to a factory and bought a roll of non-porous 6o mil plastic sheeting, which is about twice the thickness of a credit card, and which is highly resistant and non-degradable with extreme puncture and tear resistance, with dimensional stability under high loads and temperature fluctuations, and can provide protection from a minor ecological disaster, so they can just make their own mattress covers! Oh Dear! Look at me! I have been rambling on again!

Anyway, I can’t write with the flair of Mick, so I opted to just show you a series of pictures illustrating why the American Flag has to go! If a picture is worth a thousand words, then here are 13,000 words which speak for themselves. 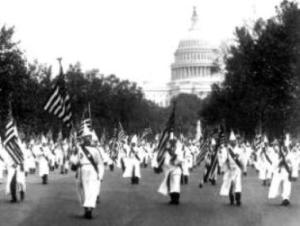 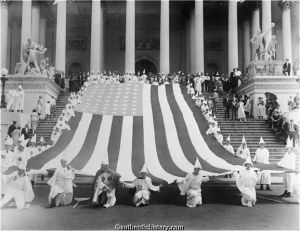 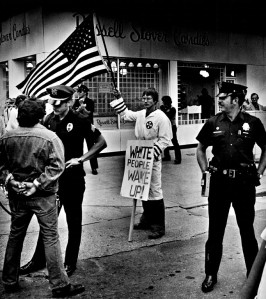 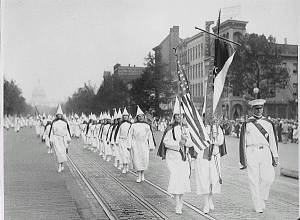 And while all of the above was sensational enough, if narrowly focused, I hope it made you think. Finally, here is the  image I want to leave you with, which screams, LEST WE FORGET!  The American Flag over the Manzanar Japanese Internment Camp during WWII where loyal Americans were rounded up like cattle just because of their skin color! Which is really not “yellow” like a lot of people think, but maybe more of a bronze hue. The Japanese often use the word “shiroi” which means “white” to describe the lighter shades of their skin color. But it isn’t really “white” in the sense which we use the word to describe somebody from say, Denmark.  Maybe “tawny” is a better way to describe it??? Anyway, you could definitely tell they weren’t white people because of their eyes, which are slanted down on the outside of their faces, while Chinese peoples’ eyes slant down on the inside of their faces, which is how I have heard you can tell them apart. But enough of that, here is the camp!

There can be no doubt that the American Flag must go!

4 Responses to The Other Stars And Bars! (A Gallery Of Why The American Flag Must Go)