A Curious Exercise In Propaganda 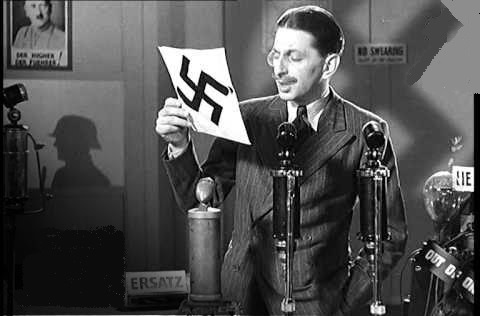 While reading through our parody website, Flowers For Socrates, I came across a curious exercise in propaganda. Here is the question put to the less than astute followers of that blog: 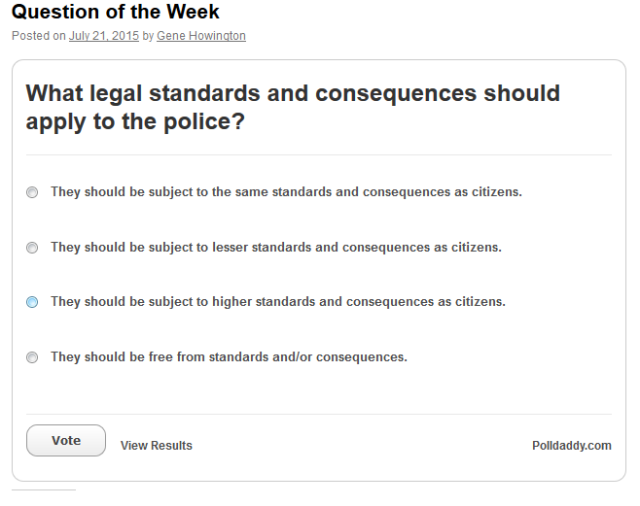 Now to the uninformed and slow-thinking, which is most of the readership there, this question presented a reasonable choice of options. That conclusion is completely incorrect.  Not only is it an absurd question, it is a glaring example of a well known propaganda technique called”framing the question.” An excerpt from this article on corporate media propaganda techniques shows how the process to distract from meaningful discussions;

ex: a nuclear accident has occurred.

ex: re frame a debate about torture by instead of debating the legality or morality of torture, debate the effectiveness of torture techniques.

The author of the post, a so-called expert on propaganda, simply framed the question in a manner which implies that the actions of the police, as a group, must be judged by standard and on a continuum which includes the average citizen. And wind up somewhere on that continuum at a spot either more, less, or the same, as the average citizen. OR, as a default choice, be subject to absolutely no standards of conduct or consequences at all. Nonsense. Let’s bust that idea up right now with this example, the police’s right to go about armed, and a misuse or abuse of that right.

Through the framing of the question, that right would have to be considered vis a vis an average citizen’s right, and it would seem obvious that the policeman has more rights than an average citizen, who must comport himself with various state and federal laws. But that answers absolutely nothing about the standards and consequences of misusing or abusing that weapon because the policeman and the citizen do not start from the same starting point.  It is the policeman’s job and function that requires he be armed. It is not just some expansion of the average citizen’s 2nd Amendment rights.

If a policeman misused his weapon, there is no intelligible answer available from the choices provided which can govern the legal consequences. Having a different right from the average citizen, does not logically result in a lesser standard, or a greater standard, or the same standard compared to those same citizens. And certainly it would be problematic if there are no standards at all.

What the proper phraseology and framing of the choices should be based on is the factual basis that the police are subject to a DIFFERENT standard.  One that is unique to their actual functioning as enforcers of the law.  One that has nothing to do with what an average citizen does or doesn’t do. The absurdity of the choices presented might be better illustrated from this slight re-working of the question: 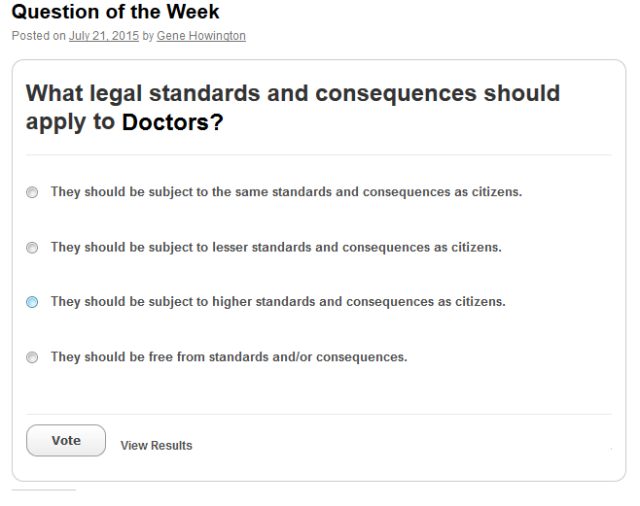 That being said, either cops or doctors could be reasonably charged with manslaughter, or negligent homicide, if their conduct fell at some extreme end of the misbehavior spectrum. For example, if a doctor operated on a patient while drunk as a skunk, and killed him, the doctor could prosecuted for manslaughter the same way as any other citizen.  But most day to day cop and doctor conduct, and misconduct, falls well short of that extreme. And it falls into the area of DIFFERENT standards. Plus, the question was notoriously silent about exactly what conduct it was that might give rise to the four choices.

And all this is not just true for doctors and cops. The same thing could be said about architects, attorneys, accountants, military personnel, teachers, etc. They are all subject to DIFFERENT standards, and a generalized question about whether they should be subject to same, higher, or lower standards as average citizens, or even no standards at all, is simply an absurd question. Or an intentional effort to mislead the reader.

I think the question, as presented by the author, was purposely FRAMED to funnel the argument into some weird and unfathomable channel, for some ulterior motive. Probably to denigrate the police, or erode support for them, in pursuit of some partisan purpose. That is popular hobby right now for many people. Or maybe the author is just really, really stupid. Who knows?

FootNote 1. The Image above is that of an actor playing William Joyce, aka Lord Haw-Haw. Wiki says:

Lord Haw-Haw was a nickname applied to wartime traitor William Joyce, remembered for his propaganda broadcasts that opened with “Jairmany calling, Jairmany calling”, spoken in an unintentionally comic upper-class accent.

The same nickname was also applied to some other broadcasters of English-language propaganda from Germany, but it is Joyce with whom the name is now overwhelmingly identified. There are various theories about its origin.

Joyce was captured by British forces in northern Germany just as the war ended,[19] tried, and eventually hanged for treason on 3 January 1946. Joyce’s defence team, appointed by the court, argued that, as an American citizen and naturalised German, Joyce could not be convicted of treason against the British Crown. However, the prosecution successfully argued that, since he had lied about his nationality to obtain a British passport and voted in Britain, Joyce owed allegiance to the king.

During the war, the British parodied Lord Haw-Haw with a series called “Nasti News.” Here is an examples. Was this a precursor of Monty Python?

FootNote 2. The caption is a word play on “propaganda” and since “gander” is also an informal term for a “simpleton”, another way of saying a “a proper simpleton.”

An attorney, with a rye sense of humor.
View all posts by Penelope Dreadful →
This entry was posted in Propaganda, Sacks Roamer Posts and tagged consequences, example, framing the question, police, propaganda, standards. Bookmark the permalink.

3 Responses to A Curious Exercise In Propaganda