And there is Pansies, that’s for Thoughts.

Curious about the name of this blog? It is from combining a line from Shakespeare’s Hamlet, Act 4, Scene 5, and an apocryphal story about an Plato, Socrates, and flowers. First, here is the line from Hamlet:

OPHELIA
There’s rosemary, that’s for remembrance; pray,
love, remember: and there is pansies. that’s for thoughts.

A document in madness, thoughts and remembrance fitted.

And here is the story, which does not appear to come from anything written by Plato:

On yet another day, Plato asked, “What is an affair?” Socrates answered, in his usual way, “Head to the woods, and look for the most beautiful flower. This time, you’re allowed to look wherever you want, and you can retrace your steps if you must.” Plato, given these instructions, went into the woods full of confidence.

“And that, is an affair,” said Socrates.

Now older and wiser, Plato asked Socrates once more, “What is life?” Socrates pondered for a moment, and told Plato, “As before, go to the woods, and find the most beautiful flower there is. You can go anywhere, and pick as many as you want.” Remembering all his previous experiences, Plato walked into the woods again. But after three days and three nights, he had still not returned. Socrates, with a bit of concern, went out in search of Plato.

Before long, Socrates had found him, in a makeshift camp that Plato had set up. He asked Plato, “Have you found the most beautiful of flowers?” Plato pointed to a flower right next to his camp site, and said, “That is the most beautiful flower in the forest.” Socrates inquired, “Why have you not picked it yet?” Plato answered thoughtfully, “If I pick it, it would wither like the last one. But even if I don’t pick it, it will wither and die sooner or later. So while it is in full bloom, I will live beside it, admiring it from here. When it finally wilts, I will look for the next most beautiful flower. This is already the second flower.”

Socrates took this in, and said, “Now you understand the essence of life.”

The Pansy itself has a rich symbolic history beyond anything in Shakespeare,: 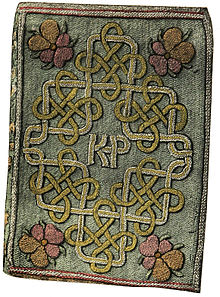 The pansy’s connection to pious humility is mentioned by Harte, who writes: “From brute beasts humility I learned;/And in the pansy’s life God’s providence discerned”.[10] Gifford evokes both Christian and classical undertones, writing how “Pansies – still,/More blest than me, thus shall ye live/Your little day, – and when ye die,/Sweet flowers! The grateful muse/Shall give a verse”.[10] Smart proposes “Were it not for thee, oh sun,/Those pansies, that reclining from the bank/View through the immaculate, pellucid stream,/Their portraiture in the inverted Heaven,/Might as well change their triple boast, the white,/The purple, and the gold”.[10]

On account of its popularity in both society and its recurring appearances in Romantic poetry, a variety of new nicknames for the flower began to circulate. Dorothea Lynde Dix proclaims that “Perhaps no flower (not excepting even the queenly rose) claims to be so universal a favorite, as the viola tricolor; none currently has been honored with so rich a variety of names, at once expressive of grace, delicacy and tenderness.”[10] Many of these names play on the whimsical nature of love, including “Three Faces under a Hood,” “Flame Flower,” “Jump Up and Kiss Me,” “Flower of Jove,” and “Pink of my John.”[17] 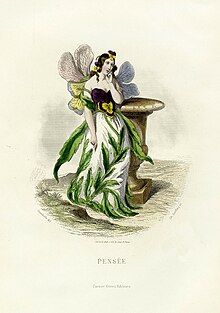 Nathaniel Hawthorne published his last literary effort, an unfinished piece, entitled Pansie, a Fragment, sometimes called Little Pansie, a fragment in 1864. D. H. Lawrence‘s Pansies: Poems by D. H. Lawrence was published in 1929, and Margaret Mitchell originally chose Pansy as the name of her Gone with the Wind heroine, but settled on Scarlett just before the book went into print.

The painting at the beginning of this post is Ophelia, by Sir John Everett Millais. You can read more about the painting here:

And more about Ophelia herself, including more beautiful works of Art which depict her, here:

So, that is the story! Here, there be thoughts! And many documents in madness!